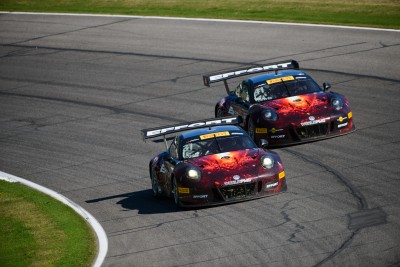 This weekend at Barber Motorsports Park, EFFORT Racing earned three valuable top-five finishes in Rounds 6 and 7 of the Pirelli World Challenge. Every point counts as the battle for the GT Championship heats up, as the team currently holds three of the seven race wins so far in the 2016 season. Teammates Patrick Long and Michael Lewis showed impressive runs in their No. 31 and No. 41 Porsche 911 GT3 R race cars on the 2.38-mile, 15 turn road course nestled in the hills of Alabama.
In qualifying, Michael Lewis set an impressive lap to land a 3rd place starting position, with teammate

Patrick Long in 6th for Race 1. Lewis dropped to 7th in the start, while Long methodically worked his way up to battle James Davison in the No. 33 Nissan for 4th position. As the fight heated up, the 05 Nissan of Heitkotter began to put pressure on Long, but the Porsche Factory driver kept the position. With high speed corners, Barber Motorsports Park offered few opportunities to pass, and the field of cars spread out for the 31 green laps. Long rounded out the top 5, earning valuable championship points, while Lewis finished 7th, setting a fast lap to start 4th in Race 2. 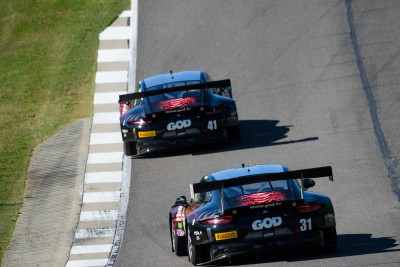 Despite the 9th place starting position for Race 2, Long masterfully passed five cars as the field went green into turn one, coming up to Lewis in 4th. Ahead of Lewis sat the No. 3 Cadillac of Johnny O’Connell, who spend the next several laps with the No. 31 and No 41 Porsches in his mirrors. With a half hour to go, Lewis went wide, and Long took advantage, advancing to 4th place. In the final laps, the battle for the podium heated up, as the top four cars raced nose to tail. Long’s push in the final laps brought him right on the rear of Johnny O’Connell, ultimately finishing in 4th, with Lewis 11 seconds behind in 5th.
The race will air Sunday, May 1st at 4:00PM ET on CBS Sports Network. From here, the championship will take a three week break, resuming May 19-22 at Canadian Tire Motorsport Park for Rounds 7 & 8. For more information, visit world-challenge.com.
Patrick Long // No. 31 Porsche 911 GT3 R
That was as near to a win as they feel. Sometimes you don’t end up on the podium but you got everything out of it. We did a lot of changes last night and took some big swings on set up since we were starting towards the back. It paid off, and it’s a great success for our group. This weekend went well for us, not over one lap, as qualifying was a struggle for us. I knew the track temperatures were going to be high, and the loads are very high. Efficiency and tire wear was where we made our pace, and that proved difficult for overtaking. They had us there at the end, and with the race mostly going green, that played into our hands. It was tight there at the end. It was great to pull the leaders in, but tough to pass here. Barber Motorsports Park is still a great place to come and an incredible facility.

Michael Lewis // No. 41 Porsche 911 GT3 R
We had a great start today, which was really exciting. I was nearly into P3 in the first few turns, which was a great change from yesterday. I ran in P5, and got loose in turn two, and Patrick got by me. I was I was just trying to follow him and he was quite good. Hopefully he was able to catch the leaders, and I could be right there. I ended up staying 5th, and earned some decent points. Overall, I’m happy I got a good start and a good finish for the team today.