Today EFFORT Racing, with the support of Porsche Motorsport North America, announced the Pirelli World Challenge sports car racing team will take a hiatus from 2016 competition, with every intention to continue the program in 2017.
The decision stems from the current supply and demand crisis in the oil industry, an industry from which EFFORT Racing receives funding to run the championship. In a recent analysis, the New York Times estimated the current trends of oil prices is in its worst decline since the 1990s. Although the current price of $45 a barrel is an improvement from earlier this year, it remains a far cry from what has been the normal price of $100 a barrel. While oil companies have been making cutbacks for months, the Chicago based team has decided to suspend their 2016 campaign and focus on building sponsorship to fund the program for the 2017 championship.
“It is with great disappointment that we announce a halt to our 2016 season,” said EFFORT owner Chuck Toups. “We want to thank our fans for their wonderful support and salute our competitors in the series as they continue their run to the Pirelli World Challenge crown. We couldn’t be on the sharp end of the grid without our all-star crew, and the excellent support provided by Porsche. We’ve already started the development of our 2017 program to reclaim the top spot in the championship.” 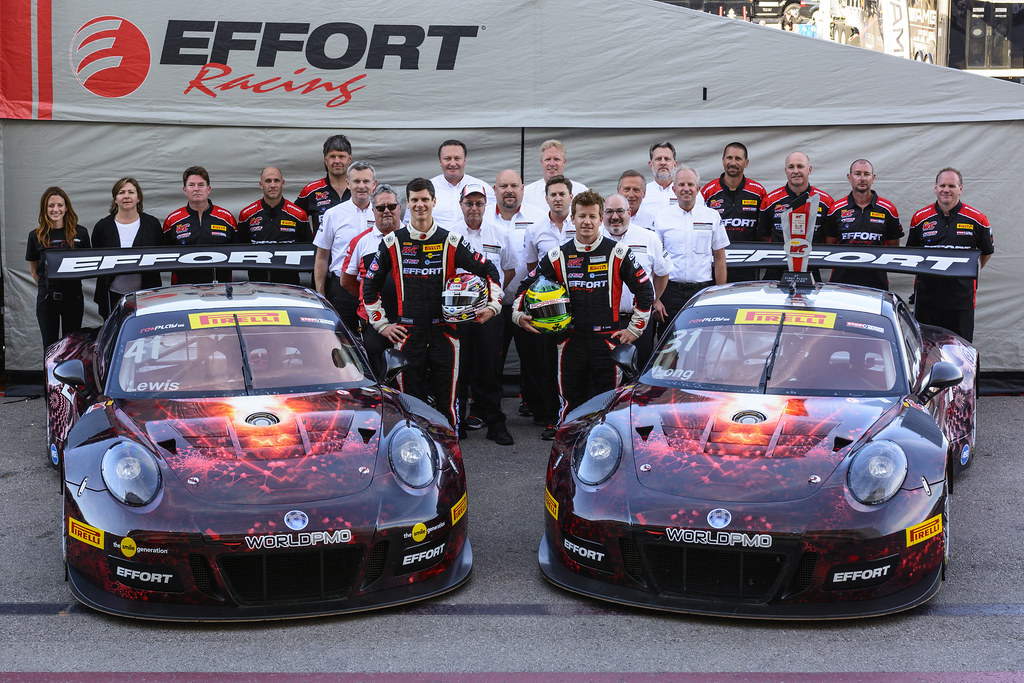 The team’s conclusion to step back from the series came at a difficult time, with drivers Michael Lewis and Patrick Long currently sitting fourth and fifth in an immensely tight battle for the GT Driver Championship, and the team presently third in the GT Team Championship. Long won the opening round at Circuit of the Americas, and again made the podium at Round five’s Long Beach Grand Prix. The crew made headlines after Circuit of the Americas when a heroic 200 man hour effort was required to repair Long’s heavily damaged Porsche 911 GT3 R in between Round 2 and 3 of the championship. At the Grand Prix of St. Petersburg, Lewis, currently in Porsche Motorsport’s Young Driver Development Program, earned back to back wins, his career-first GT wins.
Although not competing, EFFORT Racing will continue its long standing relationship with Porsche as the team continues to have conversations about a sponsorship program. While there are potential opportunities on the horizon, none could come to fruition quick enough for Rounds 8 and 9 at Canadian Tire Motorsport Park later this month. Instead, the team will put all its focus on 2017 and remains optimistic a program will be secured for 2017.
“This is a huge disappointment for the whole team,” said Team Manager Erin Gahagan. “The crew worked so hard to earn the first win of the season, and then they again showed how strong they are when they worked around the clock to get Patrick’s car back together for him to put on an incredibly impressive performance at St. Petersburg. They’re every bit of deserving for this year’s championship and it’s heartbreaking to have to walk away from this fight. But with the dedication of the crew and the support Porsche has provided EFFORT Racing, we will continue to work hard and build a stronger team for the 2017 championship.“
###
About EFFORT Racing

Pirelli World Challenge team EFFORT Racing was founded in 2012 with a simple goal: to be Champions, both on and off the racetrack. In doing so, EFFORT seeks not only to win races, but to spread an uplifting and encouraging message of hope. The team strives to infuse God’s integrity and standards into the passionate and exciting world of racing. At EFFORT Racing, every member of our team comes to win. From our drivers, to our crew, to the folks behind the scenes, the EFFORT Racing family knows that every member of our team is crucial to a winning racing organization.